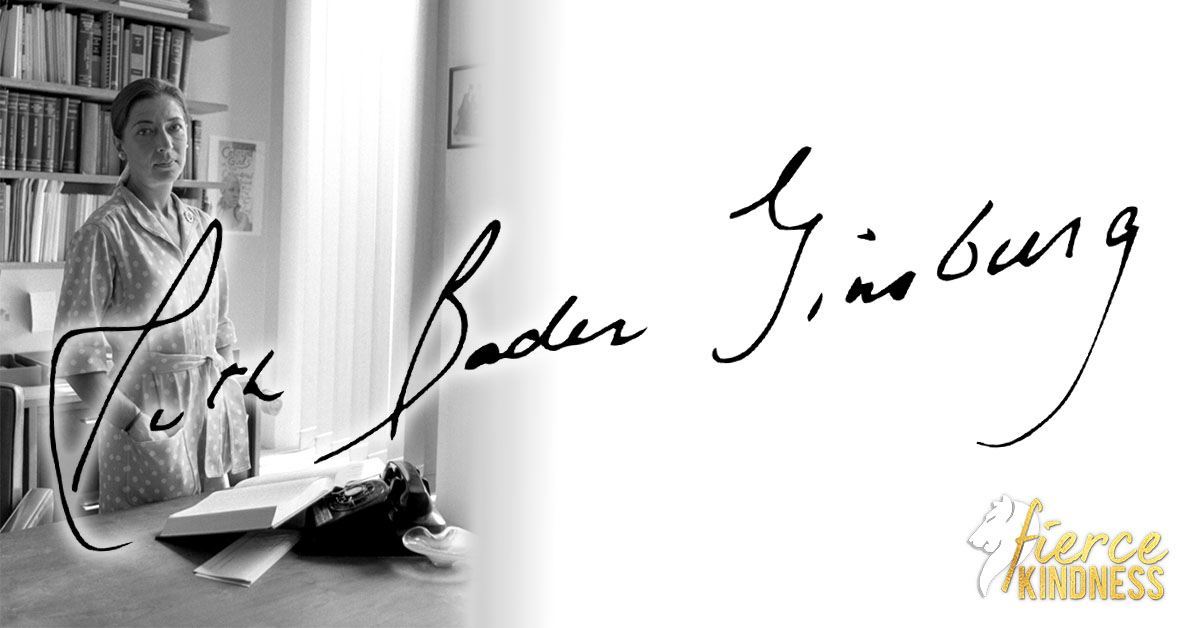 For those of you not in North America, Ruth Bader Ginsburg was a Supreme Court Justice in the United States. She died a few weeks ago leaving an important gap on the Supreme Court and there is a big political battle going on as to whether her spot should be filled before – or after – the election.

In her 27 years as a Supreme Court Judge, and before that 13 years as a Federal Appeals Court Judge, she dissented on and had a lasting impact on many legal cases of great importance to US Law.

Below you’ll find a short background history, followed by the Ruth Bader Ginsburg quotes and finally, a short Fierce Kindness practice to help you reflect and grow from the quotes. Enjoy!

Who was Ruth Bader Ginsburg? 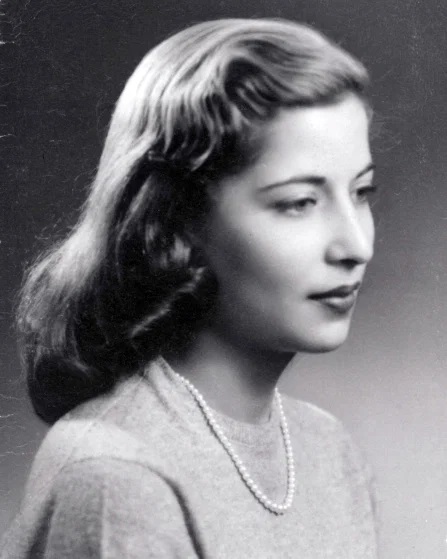 Ruth in 1953 when a Senior at Cornell University

Ruth Bader Ginsburg was born Joan Ruth Bader, in Brooklyn, New York on March 15, 1933. She died this year (2020) on September 18 at the age of 87 of complications from pancreatic cancer. Her death has left a hole in the Supreme Court of the United States, and thousands of people left candles, flowers and messages out front of the Supreme Court building mourning her loss.

Ruth’s family nickname was “Kiki” because she was apparently a kicky baby. And it was when she started school that she became Ruth – because there were several Joans already in her class.

It seems Ruth was a leader from an early age, becoming a summer camp counsellor, editing the school newspaper and writing articles on the Bill of Rights as well as helping to organize social events.

But she did not get to attend her high school graduation as her mother died the day before the ceremony. Despite being a good student, Ruth’s mother had missed out on a university education at the expense of her brother, and so had actively encouraged Ruth to be an independent, educated woman. This continued to inspire Ruth throughout her life.

Following high school, Ruth got her bachelor’s degree from Cornell University, and then went to law school at Harvard – transferring to Columbia Law School and going on to graduate joint first in her class. She was one of few women in class and throughout her career would call attention to gender-based inequity.

Ruth Bader met her husband to be, Martin Ginsburg, on a blind date in 1951, and married him 3 years later just after graduating from Cornell. She had a daughter Jane Ginsburg in 1955 and a son, James Steven Ginsburg in 1965. She is known for celebrating the mutual support between her and her husband in raising their children – and credits her husband’s support as essential to enabling her career to succeed while raising a family together. 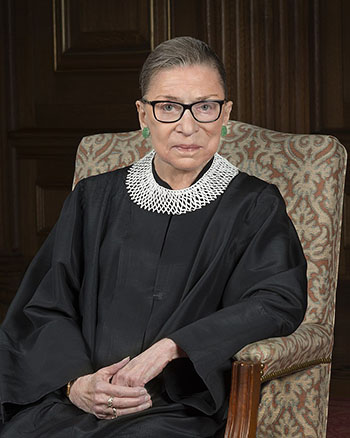 A 2016 Portrait of Ruth as a Supreme Court Justice

Interestingly, apparently Ruth was not a great cook, so Martin was the chef of the household – cooking for the many dinner parties they held. Martin sounds like a wonderful husband. Sadly he died in 2010 – just days after celebrating their 56th wedding anniversary.

Some of Ruth’s career highlights include being inspired by the gender equality she saw while working in Sweden. In fact she learned the Swedish language while co-authoring a book on international law procedure with Swede Anders Bruzelius.

Ruth taught civil procedure (unusual for a woman) at Rutgers Law School (1963-72) and Columbia Law School (1972-80), becoming the first tenured female law professor at Columbia. During this time she also volunteered in several capacities for the American Civil Liberties Union, in particular co-founding the Women’s Rights Project in 1972 – working on it until her appointment to the Federal Bench as an Appeals Court Judge in 1980.

There is so much more to Ruth Bader Ginsburg – her friendships, volunteering, career achievements and attitudes – than I could begin to share here.

A free thinker, she was known as a dissenter on important topics. Specifically she advanced the rights of women, people with disabilities, both black and indigenous peoples, fought for fair pay and health care for all, increased environmental protection, and helped maintain the independence of US government scientific research agencies. 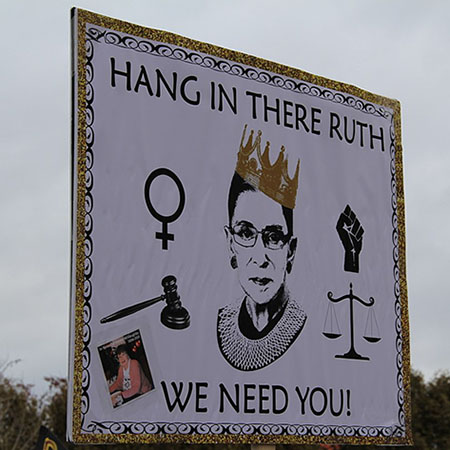 In short, Ruth worked to make American society a better place for all – yet the impacts of her work stretch far beyond American borders.

If you’d like to learn more of the facts, check out the Wikipedia entry here.
And see some fun photos of Ruth as a toddler and beyond here

Here are 20 of my Favourite Ruth Bader Ginsburg Quotes: 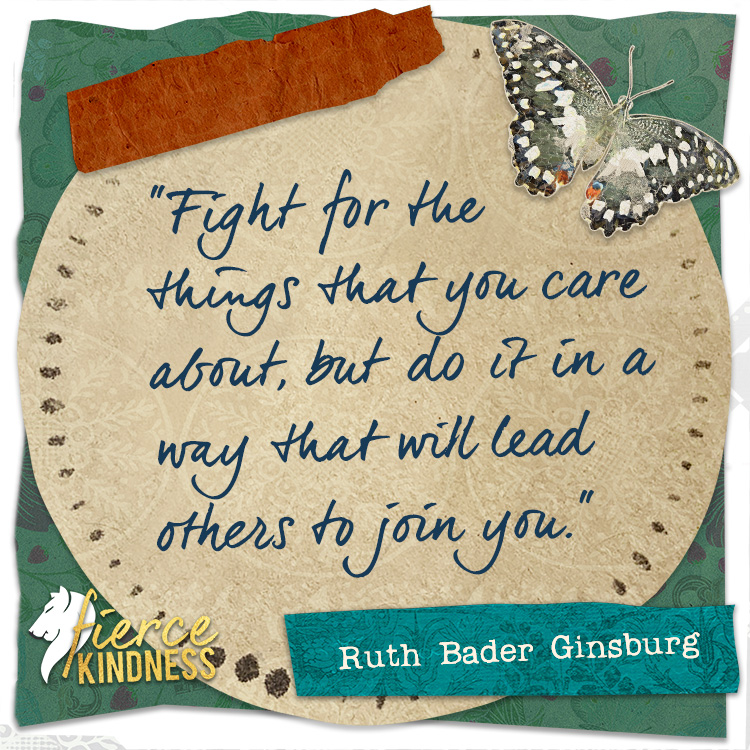 I’ve separated the quotes into the first 10 quotes – about life more generally, and the second 10 are some quotes on women’s rights and diversity.

Which of these quotes most speak to you?

I hope you enjoyed these quotes from another inspiring and daring woman.

And if you’re looking for an inspiring movie to watch, you could try the 2018 film On The Basis of Sex which according to IMDB shares “her struggles for equal rights, and the early cases of a historic career that lead to her nomination and confirmation as U.S. Supreme Court Associate Justice”. Although many criticised the movie, apparently Ruth herself loved it!

If you liked this Ruth Bader Ginsburg quotes article, try:

Image of Ruth Bader Ginsburg on Placard during 2018 women’s march as the Notorious B.I.G. by Montana Suffragettes